Setting Up Your Own Comedy Workbook 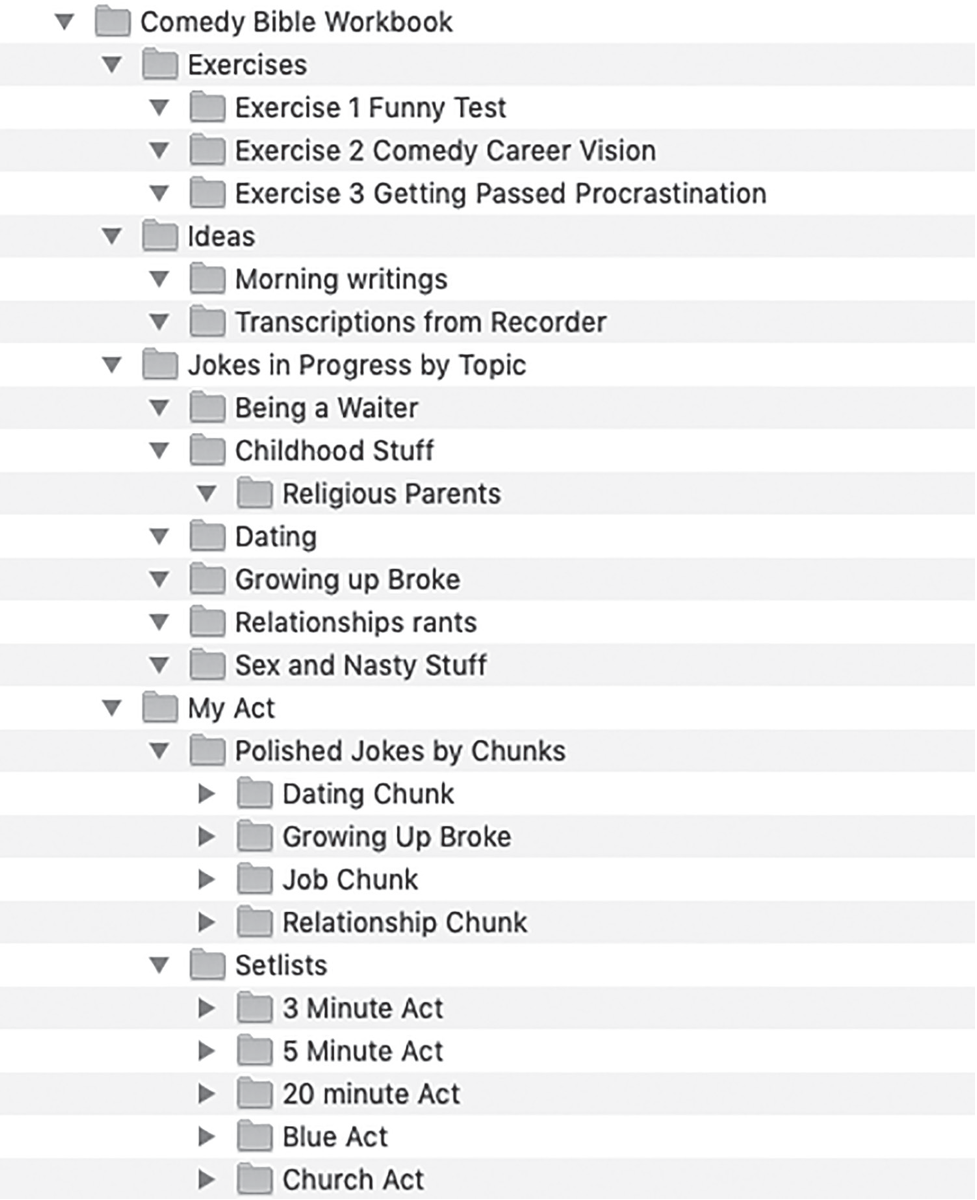 Post here what you can GIVE as a Comedy Buddy rather than what you NEED.

Chapter 13 Your Life is a Joke: Finding Authentic Topics

For instance, what’s so funny about a brain tumor? Nothing… unless you’re Jim Gaffigan. Gaffigan opens his Noble Ape comedy special with material about how his wife, Jeannie, underwent surgery for, and recovered from, a brain tumor. Certainly not a funny topic. When asked why he used this material, he said:

“We all have tragedy we’ve dealt with in our lives. It’s familiar to people because we’ve all been in those moments of panic or sadness, so that stuff works pretty much anywhere.”

Here’s a quote from his show:

“It’s been hard, but the tumor is gone along with my ability to ever win another argument. It’s not like I was winning a lot before, but now I’m retired. And luckily my wife’s not the type to bring it up. Well, once she did. She was like, ‘You know, I did have brain surgery.’ And I couldn’t be like, ‘Yeah, that was like a month ago. It’s time to move on, you know?

What about my seasonal allergies? We all have our cross to bear.’”

Divorce is usually a very painful life event, and Chris Rock devoted a chunk of his Netflix show, “Tambourine,” to it:

“I’m going extra hard to compete with my ex to impress my kids. ‘I don’t know what you’re doing at your mother’s house but I’m gonna

top that shit.’ Sometimes I bring guest stars home. I make sure the kids go back to her with a story. ‘Mama! Mama! Drake helped me with my homework! Lady Gaga made me a grilled cheese sandwich!’”

Hey, there’s funny in boring. Having a college major in art history doesn’t seem like a laugh-a-minute topic. But Australian comic and former student of mine, Hannah Gadsby, does a twenty-minute routine on art history for her Netflix special that is not only hilarious, but won an Emmy for Best Writing for a Variety Show. “Art history taught me, historically, women didn’t have time for the think-thoughts. They were too busy napping, naked, alone, in the forest.

Even biologically…I don’t feel like I’m the same species. For a start, I’ve got a functioning skeletal system. If you go into the galleries, you see, if a woman’s not sporting a corset and/or a hymen…she just loses all structure. Just sort of like…just flopping about all over the place, going,

“Oh, what is furniture?” Sidesaddle, tits akimbo. No wonder we can’t reverse park, ladies! Dumb history women couldn’t even reverse park their arse onto a chair!”

(Married) My wife won’t tell me when she’s mad. I have to guess. I knew she was mad at me last time because she made me a sandwich with the last two pieces of bread... Well, it wasn’t even the last two pieces. She had to dig inside the bag, reach to the very bottom of the bag, and grab the other end piece. I didn’t notice at first because she made the sandwich inside out.

(Being Single) Reality doesn’t hit you about how bad the single life is until you call your friends to go out… none of your friends are available because they’re out with their women. ‘Yo, what up boy? Whatcha trying to do tonight?’ ‘Oh, man, I ain’t doing nothing. It’s cupcake Tuesdays. Me and my lady, we make cupcakes. Red velvet. I get to lick the bowl and everything.’ ‘Lick the bowl? Man, get off my phone.’ ‘Hey! don’t be mad at me ‘cause you ain’t got no bowl to lick.’

(Being single is hard…) It’s like looking for a job. Because when you’re first looking for a job, you’re real picky. Then you start breaking down. You ask your friends if they know anybody hiring. Then you’ll take a part-time job doing anything. You just want something with benefits.

(It’s weird being mixed-race because…) it looks like a ghost and a shadow made love and I was the result. Our Sears family photo was always a little tricky for us. The first few takes, my father would come out just eyes and teeth. Then they’d adjust the lighting and he’d be beautifully lit, but my mom looked like an apparition.

(Being Middle Eastern) A lot of times in Hollywood, when casting directors find out you’re of Middle Eastern descent, they go, ‘Oh, you’re Iranian? Great. Can you say, ‘I will kill you in the name of Allah?’ I could say that, but what if I were to say, ‘Hello, I’m your doctor.’

(Having a disability) “It’s weird how people want to bully a disabled guy with Tourette’s, because there’s no winning for them. This dude wanted to fight me. I said, ’Bring it! I’m not scared! I was bullied when I was younger, so you’re not gonna bully me as an adult. And if you fight me, you’re at a disadvantage. Because if you beat me up, you’re a dude that beats up a dude with a disability. And if I beat you up, you just got your ass kicked by a dude with a disability.’”

(Being an immigrant) The police pulled me over and asked me if I have anything illegal in my car. I looked at my cousin and I ran.

(Siblings) Having a twin brother is strange because you grow up with people asking you: ‘Hey is it true that you’re connected? Like when he cries, you cry, and you feel the same thing?’ No! Imagine if that were true. Imagine if I could feel every time my brother masturbated. Like if I’m doing a show and all of a sudden...*groan* ‘Oh…OH…’

It’s hard being Italian because we have a lot of stupid myths and beliefs that don’t make any sense. In my house, no one will kill a moth because they say it’s one of your dead relatives. If you die and come back as a moth, you should probably die again. Every time I come home there’s five moths flying around the light outside my house. The only people I know in my life that died are my aunt and my grandma, who are these other three jerks?

Paula Poundstone jokes about being an atheist:

(Religion) “Weird thing about being an atheist is we don’t have a mandate to convert anybody. You’re not gonna wake up on a Saturday morning and see me at the door like, ‘Hey, I brought this blank book for you to look at.’”

Here, comic Paul Elia jokes about how hard it is being from a background nobody knows:

“Chaldean is my ethnicity—we’re Catholic Middle Eastern people from Iraq. Not a lot of people know what that is. It gets frustrating when I text ‘Chaldean’ to my friends and the iPhone auto-corrects it to ‘Calzone.’ The iPhone is like, ‘You must mean pizza’…Nope—just my race.” 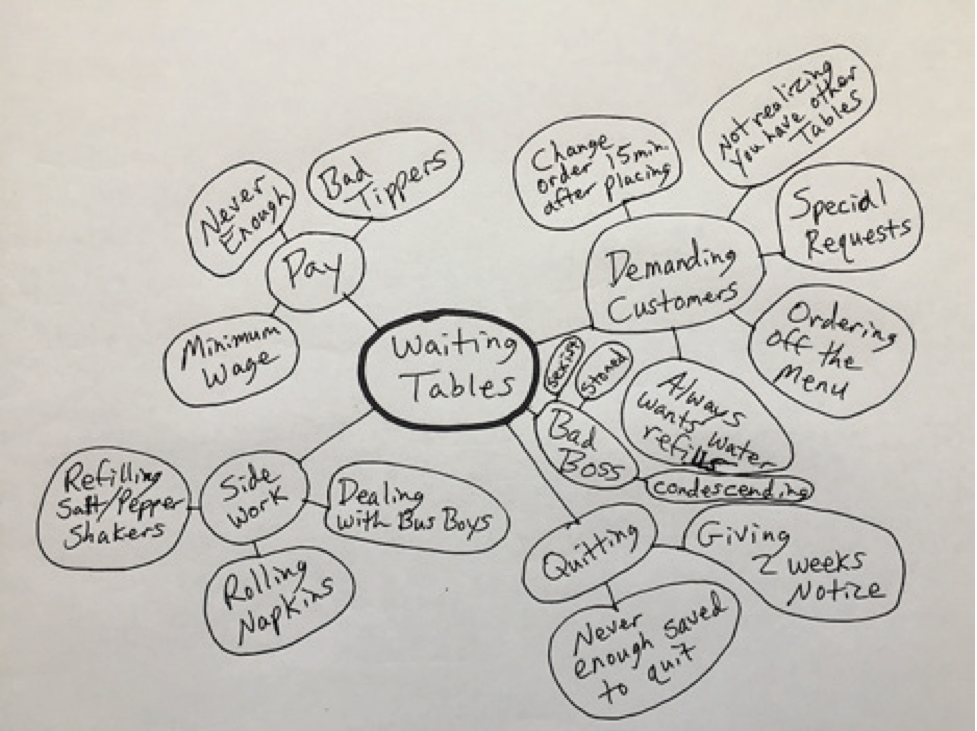 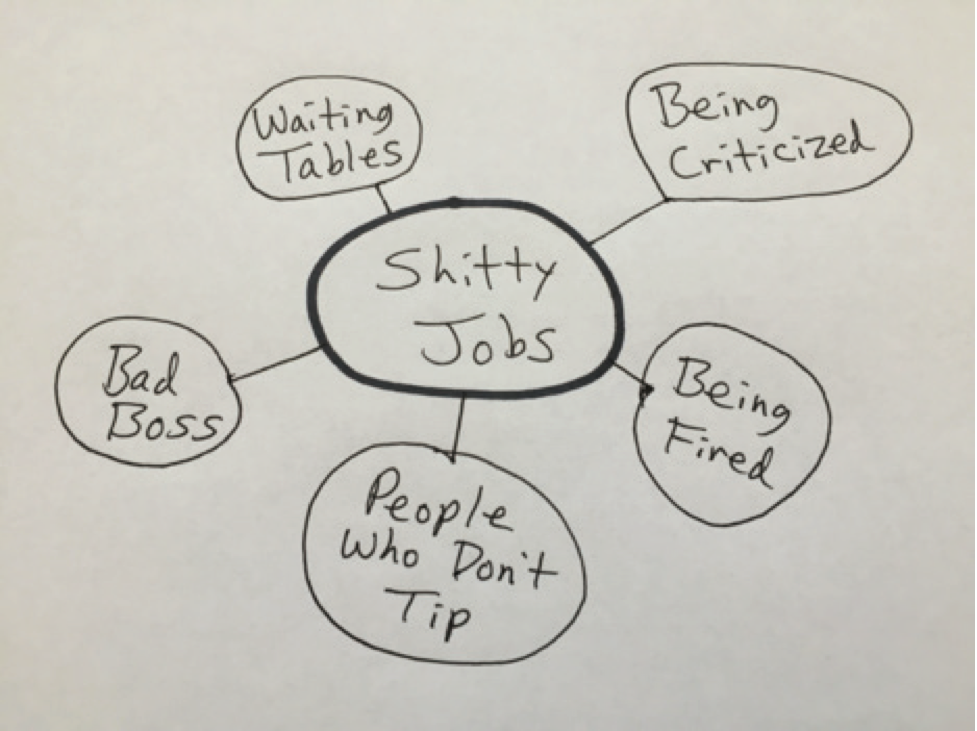 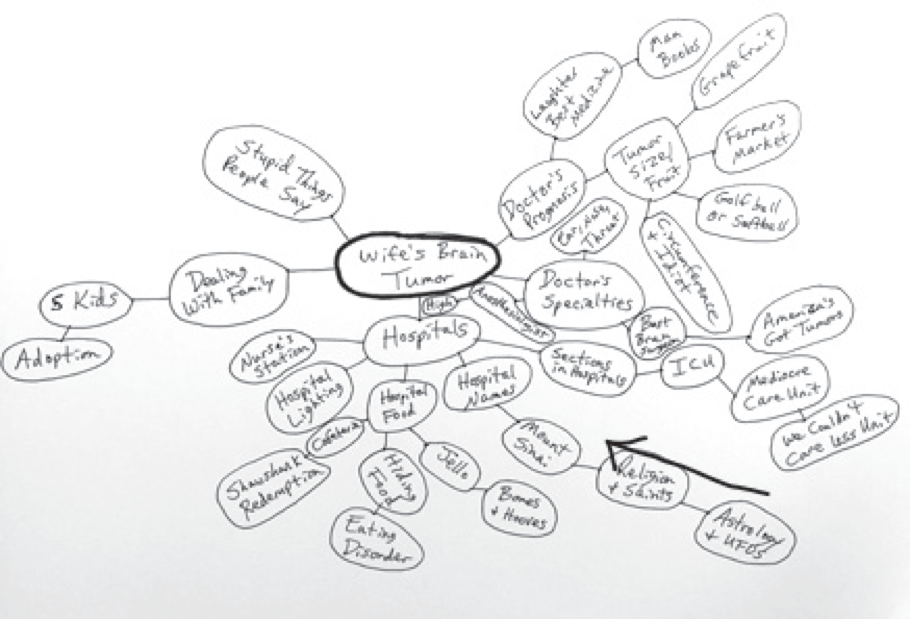 The attitude words are: hard, weird, scary, and stupid. So, let’s say one of your authentic topics is how hard it is being an African-American. And filling out your mind-map, drugs come up as a subtopic. So, when ranting, perhaps your attitude shifts from hard to stupid and your topic shifts to stupid stereotypes that all African-Americans take drugs. Next thing, you go… “That’s stupid because…” And you end up with Wanda Sykes’s brilliant joke:

“…Black people, we don’t even get our hands on opioids. They don’t even give ’em to us. White people get opioids like they’re Tic Tacs. It amazes me how many opioids you motherf**kers have. I’m sitting in a writer’s room with a bunch of white people, right? And I’m like, ‘Damn, I got a headache.’ White people start pulling out all kind of pills and shit. Just f**king loose pills in Ziploc bags. ‘Would you like an oxycodone? I got oxycodone.’ ‘No, she should take a Percocet. Give her a Percocet.’ Another girl’s over there preparing a needle. ‘Give me your arm.’”

And see, black people let it hang out at the funeral. They don’t care, they’re (act-out of screaming)! Lord have mercy, Jesus, help me, Lord…And then they jump right on the coffin. Take me God, take me, take me, take me!” -- RICHARD PRYOR

Robin Williams adjusted comedy to the cocaine-paced ’80s with extremely short setups, and wild act-outs. Can you identify all the act-outs in this joke?

“It’s weird that baseball players have to go in front of a grand jury and say, ‘Yeah, I did cocaine. Can you blame me? It’s a slow goddamn game! Come on Jack! Standing out in left field for seven innings, and there’s a long white line going down to home plate! I see the guy putting it out going, ‘Heh heh heh heh!’ And that damn organ music too, the whole (does intro to ‘Charge!’)! Third base coach is always doing this...

(wiping nose, fidgeting around). When he’s doing that, I don’t know whether to slide or do a line! People sliding into home plate headfirst, umpire goes, ‘You’re out!’ ‘No, baby, I’m up now! Ha ha ha!’”

Here’s another Williams joke that depends on act-outs:

Act-outs are more effective in present tense. Rather than, “This girl said to me…” say, “This girl says to me…” and then act out the scene as if she’s speaking directly to you.

Check out the act-outs in Michelle Wolf ’s joke:

“The environment is in terrible shape, and it’s weird because most people pretend that they care about it. I don’t believe anyone actually does. Because, if anyone actually cared about the environment, there’s no way fountains would still exist. Fountains are a real big ‘f**k you’ to thirsty people. Imagine bringing a little kid from a third-world country to see a fountain. He’d be like, (act-out) ‘Look at all the water! Can I have a sip?’ And you’d have to be like, ‘Oh, no, no! That’s for decoration.’ ‘Well, can I at least grab the money out of it?’ ‘No, those are for wishes and were thrown there by people that can afford to throw money. And you know what they didn’t wish for? Water. Now, come on, I’m gonna show you a water park. That’s where the water’s for peeing in.”