Slay then gets many more laughs off the topic “Two-Weeks’ Notice.”

Say these bits out loud to get the feel of doing an act-out:

It’s weird how you can tell a lot about a guy by the way they play tennis. I played with this one guy and he couldn’t say ‘thirty-love.’ He keeps saying [actout] ‘Thirty-I really like you, but I still have to see other people.’

My father’s been on my ass my entire life, constantly questioning me. I was an altar boy, he asks me, [actout] ‘Do they pay you for this shit at the church? You making any money?’ I then ask the priest for a raise, [act-out] ‘Listen, we know what’s going on here, you’re collecting a lot of money during the mass, and no one’s getting a cut.’ The priest is like, [act-out] ‘We don’t pay for mass, we only pay for funerals.’ I say, ‘Put me on the funeral circuit, I’ll start working funerals!

Now that you’ve got the feeling of going into an act-out, below are some setups for you to do your own. Remember, act-outs always include speaking words, not just making sound effects. Try finishing these setups with your own thoughts:

“Mothers are hard on their daughters. My mother is overly critical about my weight. I could win the Nobel Peace Prize and she would be saying…” Do an act-out of your mother telling you she’s happy you won the prize while also criticizing your appearance.

“Politicians lie. When they say, ‘I’m going to create new jobs and prosperity,’ what they’re really saying is …” Do an act-out of a politician saying what’s really going to happen. “Some days are just so hard. I had such a horrible day. It was as if when God was making plans for my day, he was going …” Do an act-out of God planning your bad day.

“Last night I got sick after eating at a sketchy restaurant. It was as if my stomach was going …” Do an act-out of your stomach criticizing your choice of restaurants.

Say the jokes below out loud to get a feel for mixes starting with, “It’s like…”

“Weird thing about divorce is that after the custody battle, you gotta divide the money. Whoever makes the most money has to pay the legal fees for the other person. So, I had to pay for a lawyer to divorce me. That’s like hiring a hitman, to kill you. (Mix/act-out) ‘Okay, here’s a picture of me. I’m gonna be at Burger King at 10:38 p.m. Shoot me in the head and give me a call.’”

Below, comic Paul Elia takes his topic, “Being Chaldean,” and mixes in the subtopic Airbnb:

“Chaldeans live in Iraq. Unfortunately, we don’t have our own country. It’s like we’re using Iraq as an AirBnb. (Mix/act-out) ‘Great place to vacation! They’re very flexible with the checkout time. The wi-fi password is SADDAM1—all caps!’”

Jerry Seinfeld illustrates how horrible buffets are by using a mix:

“The buffet is basically the answer to the question, ‘Okay, things are bad, how can we make them worse?’ How can we design a foodhuman-interactive environment? That’s like driving your dog up to Petco, giving him money, and saying, (mix/act-out) ‘Why don’t you go in and get whatever you think you should have?’”

“No one cares about flies. You can just swat them. But we don’t do that with bees because they have the ability to sting you. So, there’s a level of respect. A bee is basically like a fly with a gun. People act the same way, too, ‘Oh shit! It’s a bee; let him do whatever he wants…We don’t have any honey, okay? Here’s an empty Coke can, just leave!’” 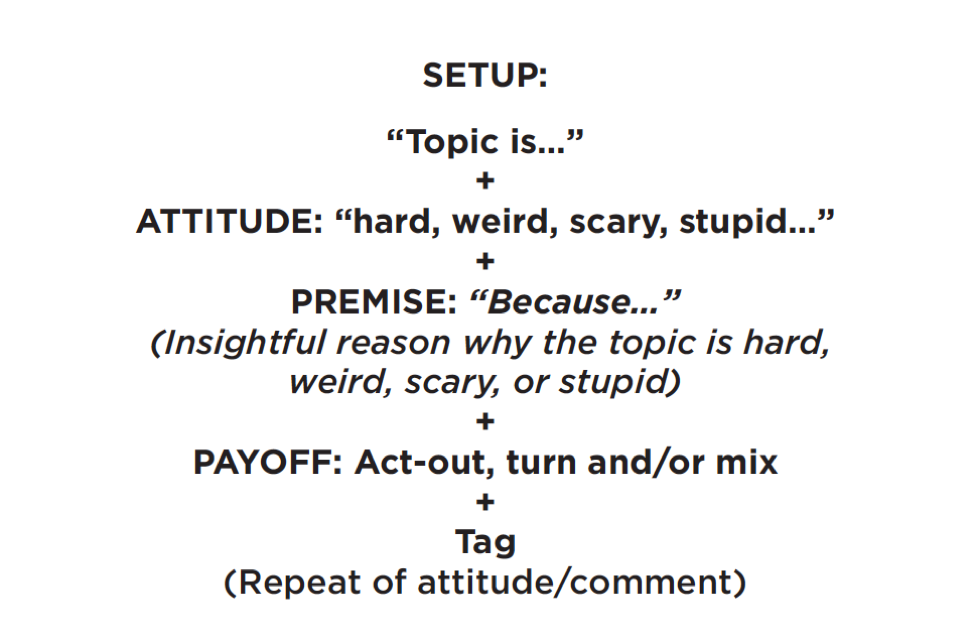 “Judy, I want to be like Chris Rock and just rant and be wild onstage and say what’s on my mind! Formulas are hack!”

Well, take that joint out of your mouth, sober up, and listen! Because guess what—Rock’s jokes are in perfect stand-up structure.

“It’s hard being a cop. I know it’s hard because that shit’s dangerous. I know it is, ok? But some jobs can’t have bad apples. Because…some jobs, everybody gotta be good. Like…(mix) pilots. You know? American Airlines can’t be like, ‘Most of our pilots like to land. We just got a few bad apples that like to crash into mountains. Please bear with us.’”

Rock starts with the attitude “It’s hard being a cop.” He goes into his premise that starts with because: “Because, that’s shit’s dangerous, but some jobs can’t have bad apples…” Then he goes into a mix/act-out. ‘Most of our pilots like to land. We just got a few bad apples that like to crash into mountains. Please bear with us.’”

Check out Chris Rock’s take on why heavyset black women are sexy. Watch how he goes into jokes about women’s fat ankles. He not only gets away with it, the audience goes wild because of the way he sets it up with an original, intriguing premise:

“We got a lot of women here tonight. Love the women. You know who my favorite women are? Big, fat, black women. Give me a sister about 350 pounds. The best people in the whole world. You know why?

(Premise) ’Cause we live in a society where nobody likes who the f**k they are. Everybody’s on Prozac, or some shit. Everybody’s getting cosmetic surgery. Nobody likes who the f**k they are except fat, black women. Fat, black women don’t give a f**k what you think. She’s going out on Friday night. She got an outfit on. That shit match. She got the pumps on, and the pump fat coming out the pump. That’s right. It looks like they baking bread in her shoe.

(Act-outs) ‘Baby, your foot ready yet? I’ll just sprinkle some cinnamon on it.’

That’s right. She got an anklet on, and that anklet’s holding on for dear life.

The premise tells the audience the reason your topic is hard, weird, scary, or stupid. It’s usually preceded by the word “because…”

A (topic) is hard because…? How you answer this question creates the premise. “It’s weird how popular Jesus is…Jesus is so popular, because he died at the peak of his career, okay? He was young, he was hot. It would have been different had he lived longer…”

Maron’s topic is “How popular Jesus is.” Attitude is weird.

Then he gives his opinion which is that he’s popular because “he died at the peak of his career.”

This is a great premise because it’s certainly a unique point of view. And now that he has set up this premise, he flows into a mix/act-out by using this phrase, “What if…”

“…What if he got old enough to get bitter. What if there’s a third testament to the Bible right at this point—Jesus is in his fifties. He’s got one apostle left. And the book opens with him knee deep in water saying…”

Now Maron goes into an act-out of Jesus as an old guy.

“‘I used to be able to do this.’ The apostles are saying, ‘Come on, don’t yell at the water. Jesus. Come on in. It’s not your day, buddy. Come

Please, let’s go to the deli—we’ll have a sandwich. We’ll try again tomorrow. Come on, come on. But yes, you are God.’”

Slow down and torment the heckler. When a heckler interrupts the show, you don’t have to go for a zinger right away. British comic Jimmy Carr turns destroying hecklers into a work of art as he plays with them like a fish on the line. For example:

Male Heckler: When does the comedy start?

Carr: Like shoe rack? You’re called Rack? Where are you, Rack? Up there or down there? If you don’t think the comedy has started, you’re right. ’Cause it’s a very individual thing. Isn’t it? And if the show’s not for you, it’s not for you. But I suppose, Rack, you have learned a valuable lesson. You’ve learned life’s not fair. You pay your money; you take your chance. Sometimes it’s a good show, sometimes it’s not for you. But I’ll give you another example, Rack, so you haven’t had a wasted evening.

“When I used to watch vaudevillian impressionists, people like Rich Little or Frank Gorshin, I always felt like the voice was the only point. I didn’t want to do that. I wanted to be of the Robin Williams or Jonathan Winters model, where observation and storytelling was important.”

Your impressions can sound cheesy if you introduce them instead of dropping them into your jokes. Saying, “Imagine if Kanye West worked at a supermarket” or, “Here’s a conversation between Lady Gaga and the President” announces you’re going to do an impression, and it’s not very imaginative. Instead, set up the joke with a strong premise, then drop in your impression as an act-out. You’ll get laughs from the element of surprise, as the audience realizes who you’re portraying. Jim Carrey started his comedy career by doing spot-on impressions, and how he wove them into his material was brilliant.

“Luckily most of us have that voice inside of our head that goes, ‘Turning the car into oncoming traffic is counterproductive.’ If we could learn to control our impulses we could be like Jimmy Stewart because no matter what happens, Jimmy Stewart could look at it in a positive way. (Deadon Stewart impersonation) ‘Well I guess we’re going to have ourselves a nuclear holocaust…Hey, everyone, come on over to the window. Oh, look at that mushroom cloud, it’s beautiful! Amazing thing to me how something so magnificent, so colorful could just melt your face right off!’ That’s positive energy.”

The next resource section contains a lot of video embeds and may take a few minutes to load. Please be patient. Thanks!